We are a trade union which represents students, pupils, and unemployed youth (up to 35 years old). We protect their rights and interests by aiming to ensure decent work, improve working conditions for precarious workers, and spread awareness on the importance of trade-unionism and the labour movement among youth.

We provide our members with:

Trade Union Mladi plus was formed in June 2011 when two very different groups – students and trade unionists – came together as a result of campaign against the so-called ‘malo delo’ or ‘Mini work’, a form of marginal part-time employment, similar to the German concept of ‘mini job’, that Slovenian government wanted to introduce as a reform of the student labour market. Eight years later we have around 1200 members, who are on average 25 years old, and are just finishing their studies or are currently unemployed. One of our biggest successes is that, by leading a broader coalition, we managed to ban unpaid internships in Slovenian public sector.

•  addressing important issues through our work, such as precariousness, poverty, green economy, gender, digitalization;
•  empowering and educating our members about trade unionism, concept of decent work, workers’ rights and so on;
•  proposing changes of the pension law;
•  sharing information about work and employment, while warning of irregularities and breaches of the current system;
•  promoting active citizenship among youth (through trade unionism);
•  attending different protests and manifestations: against CETA, in support of refugees, against privatization, etc. 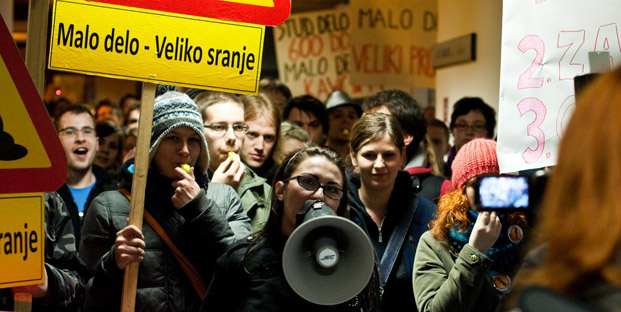 Trade union Mladi plus is its own legal entity (unlike so-called youth committees, organizational structures that we can usually find in trade unions all around the world). Our own independent status brings us several advantages, such as complete autonomy and the possibility of applying for funds via different channels.

Trade union Mladi plus is affiliated with Association of Free Trade Unions of Slovenia (ZSSS), the biggest trade union association in the country. We have therefore had the opportunity to be part of social dialogue process in Slovenia and have quickly gained access to decision making processes on national level. Trade union Mladi plus is also a hybrid – not only are we a trade union, we have since 2014 gained an official status of youth organization working in the public interest in Slovenian youth sector. The advantage of combining the role of a trade union and the status of youth organization at the same time gives us a crucial position not only in the field of employment of youth but also in shaping of youth policies on a national level.

When it comes to our work we try to be innovative, funny and educational, therefore we started to carry out certain online actions which have turned out to be quite a success.

• ‘Giving back pumpkins’: in Slovenian the expression ‘Selling pumpkins’ is being used to express outrage at someone who is telling lies or making false statements. The concept of our online action is to be aware of and monitor public statements regarding youth, employment, decent work and similar topics. If a certain authority figure – prime minister, MP, neoliberal employer for example – states something that is untrue, we make a photoshop picture of him or her, accompanied with pumpkins and disprove the statement. So in essence we return pumpkins (people’s lies and false claims) back to the ones that made them in the first place. Check out our Pumpkins Facebook album (in Slovenian) to get a visual impression.

• Stop violations!: we regularly monitor job ads and search for those that indicate different violations. We have noticed numerous job ads on Slovenian job market where a full time employment should be offered but self-employed workers or workers in other atypical forms of employment are wanted instead. Gender and age discrimination is also common. We report these jobs ads to the labour inspectorate and inform the employers about them and share them on our social media channels in order to raise awareness among young people.

This website uses cookies to improve your experience while you navigate through the website. Out of these, the cookies that are categorized as necessary are stored on your browser as they are essential for the working of basic functionalities of the website. We also use third-party cookies that help us analyze and understand how you use this website. These cookies will be stored in your browser only with your consent. You also have the option to opt-out of these cookies. But opting out of some of these cookies may affect your browsing experience.
Nujni Vedno omogočeno

Any cookies that may not be particularly necessary for the website to function and is used specifically to collect user personal data via analytics, ads, other embedded contents are termed as non-necessary cookies. It is mandatory to procure user consent prior to running these cookies on your website.